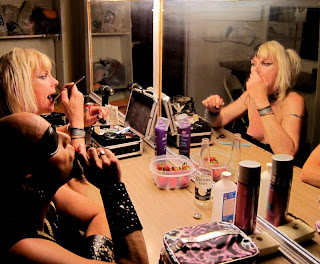 Two nights ago, I was sitting in the outdoor patio of 'The Rock' gay bar in Phoenix AZ re-connecting with my friend Scott Pierce a.k.a "Miss Pandora." The night before was the after party for the big Fetish Prom event in Scottsdale which we performed at. My band had caught up on sleep during that day, but I'd stayed up as I'd not made it till "sun-check" party time... I'd gone to sleep at 4:30 ish and had been able to get a few hr's sleep, so wasn't sleepy enough to crash at our overnight at Paul and JoHanna's. But now, as I was fighting sleep, and they were not, i was regretting that decision.

As we talked, a huge verbal fight began outside the patio... which elevated into one car being driven into another over and over disabling that 2nd car, and causing the occupant to run for cover... (this between a man and woman who did not appear to be part of the GLBT community.

Our evening ended when the police arrived, and the owner of the disabled 2nd car came into the patio area. He was also drunk, and when he saw me, he stiffened, and stared. I knew that look. it's the one I get in straight bars just before a get a verbal attack or a threat of physical attack, and it threw me off.

Too much was going on police-wise for this to develop further, and we left, but the look startled me.

The police waited for the woman driving the 'attack' car to return, (she's been circling the parking lot for about 2 hr's and every now and then swinging into it to slam into the 'victim' car. )

As we left, the band-van's breaks began to fail.

The next morning while I was struggling to get the van's master cylinder replaced, I learned of a number of shootings which had just happened in Minneapolis including one which resulted in death.

This morning, I was contacted by an old trans-friend of mine from New York, who'd relocated to south america, maintaining Hi/r connection to New York. She's an organizer and an activist/advocate for the trans-community, She wants me to call her to discuss something about my music. (I'll be doing this in the next few days to see what she's wanting.)

Last night I dreamt that I was floating high above the earth attached to a balloon, then I was in a huge grass field under a windy grey sky, watching someone else struggling and floating by high overhead as they were attached to a wind buffeted balloon. I was alarmed that they didn't have control, and appeared to be in trouble.

After our performance here in Bisbee, we stopped off at the Grand Hotel bar, and met Burt (the bartender,) who used to drum for bands contracted with big label management, (Burt now drums locally for the fun of it having left the destructive rock and roll tour life-style he described, loved, and lived, to remain in his past.

At the after-party in Scottsdale, I drank too much, and found I had crossed the line for my ability to have intelligent dialogue. After apologizing for my drinking, I knew I had to find my hotel room and give up on the night, not wanting myself to progress further down that troubled mind-set.

Tomorrow night I am recording a solo song with Shawnee for his & Gretchen's compilation disc they're assembling. I plan to also use the track for my own release, feeling the now possible way to archive my developing connection here in Bisbee.

I have made new friends in El Paso TX now with our debut performance there at a club called LIPS. We, the band, agree, that that performance is standing out as one of the best performances we've put on during this tour so far.

I find that the thing I always thought I was "doing just for now," has become "the think I do." I've been on the Rock and Roll stage now for most of the years in my life now... weird to have figured that time percentage out. And I continue to attempt to make sense from this crazy-chaotic thing I've decided to make my life's work.

Posted by venus demars at 5:29 PM No comments: