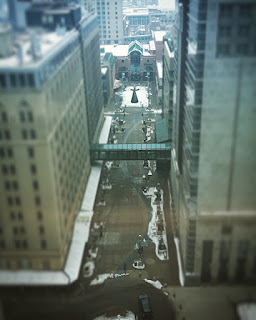 On Monday night Oct 8, 2018 our household--Lynette, myself, and Anthony, and our new kitten Ponyo--gathered around my old Epson video projector, set to project onto my possibly too-large-for-our-living-room, 8' wide school-salvaged pull down movie screen. A long A.V. room metal-gray thing which hangs diagonal one end wired to the living-slash-dining room archway, and the other end off the frame of my also probably too-large-for-our-living-room 8' x 12' "Blue Angel w/ Roses and Bones" oil painting. Itself, unable to find enough square footage on any of our walls, finds a home, suspended 8 inches below our gold-painted cove ceiling in a spread-eagle-style fetish-fashion, and levitates there 8 inches below the only surface in our house expansive enough to accommodate it.
As we eat a planned family-group dinner off plates balanced on knees, save Ponyo who prefers to chase the mouse pointer along the bottom of the screen, we watch the first episode of Dr. Who season 11. The first time Dr. Who regenerates as female since the program debut in England November 1963.
I love eating group dinners. The kind where everyone contributes something and helps cook and clean while sharing their days with each other. But because of all 3 of our erratic schedules, a group dinner, for the most part, rarely happens.
Monday night, however, which coincidentally is the same night iTunes releases the BBC Sunday Dr. Who broadcasts to its subscribers world-wide, is the singular night all 3 of us are free. The decision is made to create household Dr. Who slash group dinner Mondays, which we do till just before Lynette and I drive to the Rochester Mayo, check into our hotel, and I go into surgery.
In 1963 I am 3. Already understanding something is different about me, I love sneaking into my Mom's closet to study rows of different color high heels, their structure and lines. Seeing how my feet might feel standing in them. I marvel over how garter fasteners work, fastening and unfastening them in secret. Metal hoops over attached flat rubber disks.
Nothing in my Dad's closet interests me at all until I am maybe 8 or 9 when I discover a double set of 1940's pin-up-girl playing cards tucked far back and to the left in the top drawer of his closet dresser. I find them. A double set of cards lying side to side, all gold edged and stacked face down. Neatly waiting inside an intricately textured black on black designed flat square box. As I lift one set out I see the box is lined by a finely flocked purple inner surface.
I study each card almost daily. Each a themed photographed image of a different partially clothed woman. Each carefully staged. Each color saturated high-fashion photo-studio shot captures me. Finally I observed direct action of those incredible garter fasteners holding back-seamed stockings in place. I see how the line of those well crafted, colorfully healed shoes work stylistic magic as they extend the length of each subject's legs.
And there is also this:
I become aware that my attraction is not sexual. Not per se. Not in the normal boy-way. Not as the observer.
It is sexual as in it sparks my early understanding of body. However, I find I want to be the observed, not the observer. I want to feel these stylized pin-up see-through costumes surround me. Enveloping my skin as clothing. Not brushing against my skin as if someone is next to me.
As I grow older this difference I discover in myself magnifies. It pulls me down impossibly complex paths year after year decade after decade until I find myself sitting in a Rochester Mayo hospital admittance room dressed in a surgical gown ready for gender confirmation surgery.
A few months earlier Lynette and I both are awarded a 2019 Minnesota State Arts Board grant to write our individual memoirs. Each book we hope will  describe multi-complex gender-identity pathways which pull at us both. Even so. That is, even though we did and do advance this winding path together, each book will describe the process individually. Each in our unique individualistic ways and each from our unique individualistic perspectives. A singular gender-complex rock and roll relationship embarked upon initially by two punky kids in 1983 stumbling blindly forward now 35 years later two individualistic artists emotionally & committedly tied to one another for better or for worse.
My memory includes waving to Lynette from a bed being wheeled into a hospital room from along a hallway and nurses around me telling me she was already there waiting. Previous to that I remember the surgical prep. Helping a nurse shave my red pubic hair by pulling skin this way and that to create a smooth surface. Yes I am a ginger. Who knew? Well, for one, me, obviously. But I have worked diligently since the age of 19 when I embraced punk as a thing and began to bleach and dye my hair any which way. My red hair re-surfaced rarely after that and only for short amounts of time. My freckles however remain a constant.
I remember dialogues with my surgeon and the team.
I remember being wheeled along a more clinical hallway and through double doors into an operating suite filled with what seemed like 20 people, all of who gave greetings.
Finally I remember being lifted onto the surgical table, a narrow plank with two additional planks along which my arms were pulled to form a kind of crucifix situation. My last memory is thinking how similarly that surgical table resembled the tables in movies exploring the subject of the death penalty which still exists in some states. And how odd it felt to be lying on it. 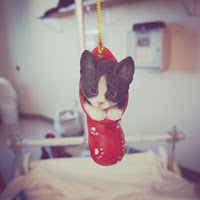 In 1983 Lynette and I married.
In 1988 I came out to Lynette, and to myself.
In 1994 I formed my band All The Pretty Horses and came out to my band mates who up until then thought I was just being artistic.
Between 1994 and last Tuesday I have been a trans-activist. Being as public as possible about my gender identity, and moving through long plateaus of gender contentment. The last plateau being one of the longest as my body after 20 years on female hormones transformed into a hybrid of gender dualism. One body but truly a third gender in every way. It behaved as such in how it functioned; visually, emotionally, aesthetically and sexually.
The gender-path from there to here is long and winding, and my trans-activist self now demands that I clearly state: my path is my path. It cannot reflect or be seen to represent a transgender norm in any way. We are all individuals. Our individual gender paths are at least as individualistic as ourselves. No one should imagine confirmation surgery as a normative end. For some of us it will never be part of our journey.
For me it now is.
On the 27th of December I will be two weeks along in discovering a new body from the inside out. One which I still don't really understand. I can say this event is singular in its profoundness.
My emotions have hit every extreme. I have struggled to gain functionality over what can only loosely be described as a kind of re-birth. Perhaps a re-generation, if I might borrow from my love of the Dr. Who series. I do feel a connection of experience and memory with the person, me, previous. At the same time, I absolutely feel a disconnection. A break which I did not expect from the person, me, previous the 13th, and me, who looks forward toward an unimagined future.
Unimagined save for one thing, it is one which absolutely includes my only true love, Lynette. 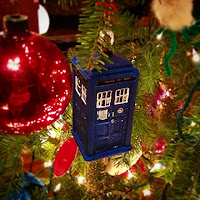 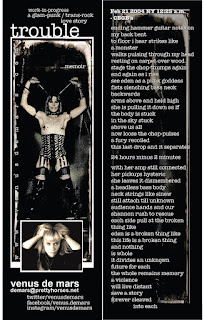 I've been asked about posting chapters or excerpts of my memoir as I go.

I need to write till its done, then look for an agent and/or publisher.

Things which have caught me unexpected.

My spouse and I are both writing memoir. Using the same timeline. So we're both going to places couples usually don't. To write our individual truths. And possibly, to un-write the tangle of memories we hold of our past.

To the extent we can.

I find this process an experience of extreme.

I'll try and post various things as I go.
-Venus
Posted by venus demars at 10:09 AM 2 comments: