Last week I was in San Francisco.  Well, not literally.  In my head.  That's the chapter of my memoir that I'm writing. The time we performed there. Flew out. Just a month after, a CBGB's gig in New York.

A well known San Fran band had invited us to be part of a monthly event they hosted... This was in 2001.

I remember the band ate breakfast in the French restaurant next door to the hotel we were staying at. Jendeen knew some French, and tried to ask for some ketchup... ended up with a plate and a fresh cut tomato on it.

Which she ate with her knife and fork as we all teased.

Then I stopped writing.

I try and write every morning for an hr or so... sometimes I get up at like 6 am. set my alarm. Make coffee, and write as the sun comes up. Just so I can keep moving on this. The Memoir.

My bass player LeFreak said, when I told him about the idea a few years ago.. he said: "Isn't that the kind of thing you do when you're DONE with your career?"

So I think I stopped cuz of the damn audit shit again. It just kinda hit me. Again. It's been hitting me for all the damn six months plus now... Just out of nowhere. And Bam!!

Sometimes it's when I just wake up. You know... kinda coming up our of that lovely place were your dreams feel more real than the covers and the cat who wants to get fed..  Just then. And Bam! Oh yeah... That. And I can't turn over... Can't go back.  Got to get up. The cat's happy... but me... I'm not so much.

And now I'm here... trying to be normal. I'm in the back yard... sun's going down. I got a fire burning down over which I'm gonna make some burgers and a few.

And I've got this fist in my stomach.

So I thought I'd write.

While the fire dies.

You guys, have been donating for two days towards our legal fees.
And let me say right now. You're damn making me cry.
Cuz... I've been feeling so bad, and I'm thinkin' like I've just done the stupidest thing by trying to be some sort of stupid rock star... For too stupid long.

And now I'm gonna cry.
Cuz I feel so humbled.
Cuz I feel your support.
And I'm not some big headed 18 year old anymore.
I'm just me.

And I love you.

And thank you all.
Thank you so much.
Posted by venus demars at 6:37 PM 1 comment:

I've been steadily working on writing my memoir. Plans are to have it far enough along to see if I can catch any interest in it by the end of the year (2013.) And yes, it's caused me to pull back on this blog... but I've been thinking lately. That I should not be so worried about all that, and get back on here.

So what's going on in my life? Well, since mid Nov (2012) my wife and I have been going through a MN State audit. It's because of me having been working as an artist, and musician for so long... but the agression I used, acting as my own record label, and facilitating the financial resources of my 4 credit cards, for 10 years, to bring myself and my band All The Pretty Horses to the world stage, caused a long string of yearly filed losses, which raised the red flag, or so the audit officer sez.

An audit, is suppost to be the way a business can explain the reasons for just something like this. For me it was the initial full-boar attempt to establish the band, which moved to building a presence in New York through touring there, which built up our notoriety back in Minneapolis, which caught the attention of a filmmaker, (Emily Goldberg,) who asked if she could follow us for a while to make a documentary of me and my band because of the uniqueness of my being 'out' with transgenderism back then, (which was unusual for the time.) This turned into a 4 year follow by a film-crew. Everywhere. It was kind of like being on a reality TV show.

It inspired me to continue with my tour plans which included a self created tour of the UK with the help of a promoter couple: Linda and Barry of 'the Mayfair Mall' there in England, who helped up get our work visas, and sort out bookings, and the tour itself once we landed.
Almost 2 years later, the documentary was finally completed; "Venus of Mars." It had it's world premier  in Amsterdam, having been accepted in their international film festival that year. They also invited the band to perform at the Paradiso. I couldn't refuse, so I pulled my credit cards out again, and we toured the UK again, and hopped to Amsterdam for the premier as performing guests of honer.

The opportunities kept coming, and I took every advantage the documentary film festivals offered, They were all "once in a lifetime" possibilities. We toured all over the US, we toured New Zealand, and finally performed in Spain, just as the stress of everything got to me and I toasted... the band dynamics had become bad, and I put the band into hiatus.

That ended 6 years agressive investment, and I had to now start all over. I formed a new band: "The House of Flowers" and re-invested in a new product: "Trashed and Broken Hearted" my debut solo album. This effort lasted 2 years, when I decided, in 2009, that it wasn't going to materialize in the way I wanted. "The House Of Flowers" was already crumbling, so I ended it.

I decided I needed to bring what I had achieved with the initial push with All The Pretty Horses, and what I'd just achieved with establishing my name, Venus DeMars,  apart from All The Pretty Horses. (No one knew me, but everyone seemed to know of my band ATPH when I started my solo project, but the end of the 2 years, people had connected the dots.) I re-formed ATPH, bringing the name out of hiatus, and added my own, "Venus de Mars & All The Pretty Horses." I wrote, recorded, and pressed "10 Bones" as our new album. And finally in 2012, I made my net-profit year.

BUT, audit hell had started. A 3 year period: 2009-2011 was being scrutinized. It happened to be this period with which I was re-casting, and re-presenting, the re-invented band, WITH a new album, so I thought no trouble.  I have no issue with being audited... it's part of running a business. Eventually you get audited. My number had come up. Our accountant, who we'd worked with for all these years.. 10 plus. felt the same. Told us to gather our receipts, put them in order, and everything would be fine. They just needed to be sure everything was in order.

We were all, wrong in that assumption.

6 months into the audit process, we've now had to hire a lawyer. 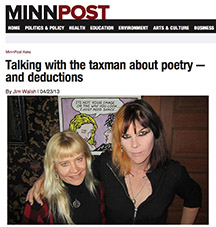